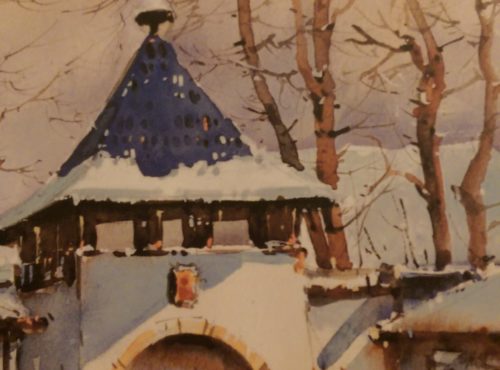 17 Oct A book a month. Our favorite

Posted at 16:10h in cartes by elephant 0 Comments
0 Likes
Share

“Sometimes God arises from things and glimpses in words”

The book of the month of October is Hanul lui Manuc [Manuc’s Inn] by Simona Antonescu. Published at Polirom in 2017, the meta-fictional novel anchors its story in the beginning of the 20th century, with a tasteful construction of the fate of Ruxandra, “the little lady”, against the backdrop of the great events of the world’s history. A literary chronicle of Wallachia, focusing on the then borough Bucharest, abounding in sometimes almost overwhelming historical information, filled with a narrative tension, to the reader’s delight, Hanul lui Manuc creates an occasion for a reading feast. Secrets reside in the half-disclosure of events, plots thicken, recalling Dumas’s French novel: “She had heard from Manuc about the plot made up for the leaving Constantinople, when his master, dressed in borrowed apparel, had left on horseback in one direction, while Bogumil, joined by a Turkish janissary, dressed in the bey’s attire, has boarded a ship, in another direction.” (446-447). The embroidery (at times evoking Sadoveanu’s Creanga de aur) also reveals the serene love story between Ruxandra and Vlaicu: “Everything he recounted had begun right then, after the night when the little lady had sat softly in his arms, her head on his shoulder, the scent of her loose hair stirring his senses and his life. Ever since then, the shoulder site on which she had rested had not truly belonged to him. His own flesh had become alienated, it had attained higher meanings, as if her extended halt on that shoulder had ennobled it” (497). The mythical-mafic place, a witness of history, Manuc’s Inn, is built with the story. Every beam adds a story, every innovation invented by Manuc adds another letter or map. Ruxandra’s thoughts are spun, evoking the life thread spinning Fates: “Maybe what’s to come is all bundled in a heavy distaff and each of us can remove any thread they want. There is a moment when the distaff is not yet begun, when the future can be any thread. From the distaff of everything that could have been, she had begun only a few months before (…)”. A refined, vivid and enjoyable reading.